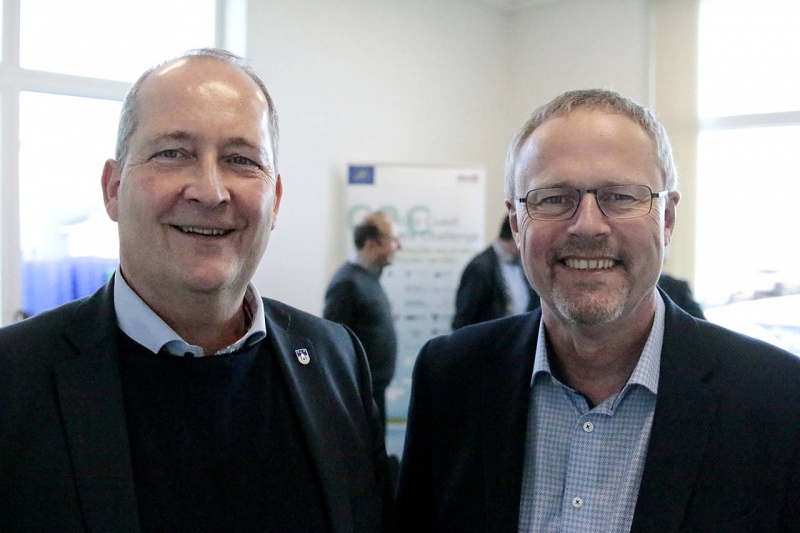 Lemvig and Skanderborg city will each offer a lighthouse project in the special climate adaptation project Coast to Coast Climate Challenge. Therefore, on Monday, the parties met to discuss how they could use each other in the upcoming work.

While the politicians in Lemvig are starting to build a their climate centre named Climatorium, Skanderborg is already building their centre named Aquaglobe.

"You could say that Skanderborg now has the building while we have the projects" says Erik Flyvholm, Mayor Lemvig.

The Coast to Coast Climate Challenge (C2C CC) is a climate adaptation project, which runs until the end of 2022. The project is supported by the LIFE program with DKK 52 million. However, Climatorium and Aquaglobe need to finance the construction cost for the buildings in other ways.

The C2C CC project is led by the Central Denmark Region, which works in close cooperation with 30 partners to find solutions to many of the challenges that climate change offers. C2C CC has initiated 24 projects across the region, two of those are the lighthouse projects. The idea is that both Aquaglobe and Climatorium will inform, research and teach how to solve the various problems that climate change will entail.

Lemvig Municipality has for several years worked on the problems that rising water in the sea and in the Limfjord presents. Therefore, a high-water wall has been erected at the port of Lemvig, and efforts are being made to narrow the Thyborøn Canal to avoid threatening storm surges in the western part of the Limfjord.

Aquaglobe in Skanderborg wants to develop and gather knowledge on how to solve problems with increasing rainfall and thus undergo flooding from streams and lakes. The Climatorium in Lemvig will gather similar solutions on how the municipalities prepare and protect themselves against the rising water levels from the sea and the fjord. Overall, the two lighthouse projects must ensure that the Region of Central Jutland comes in the lead when new climate solutions are developed. Both institutions must work closely with educational institutions and especially the business community to develop the solutions.

On Monday, representatives of the two municipalities, the Central Denmark Region and the local utilities will meet to discuss how to work even closer together in the coming years. Everyone looks forward to 2020, when the worldwide IWA, the International Water Association, holds a world congress in Copenhagen.

Any cookies that may not be particularly necessary for the website to function and is used specifically to collect user personal data via analytics, ads, other embedded contents are termed as non-necessary cookies. It is mandatory to procure user consent prior to running these cookies on your website.